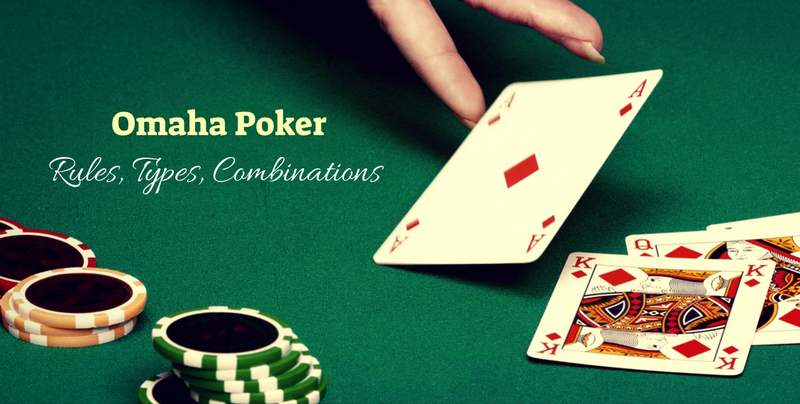 Omaha is a popular variation of poker. In fact, the only fundamental difference between this game and Texas Hold’em is that each player receives four cards instead of two at the beginning of the hand. Omaha Poker rules assume that the poker player must use 2 of the 4 pocket cards in his combination, while in Hold’em, the right to choose the cards for the combination remains with the player.

The rules of the game, the mechanics of hands, the types and sizes of bets, as well as combinations of Omaha poker completely coincide with Hold’em. However, due to the fact that players in Omaha have more opportunities to collect combinations, the value of some combos here will be much less than in the classical version, and therefore the tactics and strategy of the game will differ. Because of this feature, Omaha poker is considered a more dispersive and tough game, demanding from poker players a high level of skill.

As mentioned above, the combinations and rules of Omaha poker are not very different from those in Texas Hold’em, but there are still some points that require the newbie’s close attention. So, you should remember that two out of the four pocket cards must be included in the combination. For example, if there is a Royal Flush on the table, then in Texas Hold’em, none of the players will use pocket cards, because the best combos out of the possible have already been collected. When playing Omaha, the same board and AAJJ on your hands will give you only two sets – aces and jacks. The top three aces will be in the play.

Combinations in Omaha poker are ranked in the same way as in Hold’em. So, the strongest set of cards will be a Royal Flush, and the weakest hand is a kicker. However, the strongest combo will not win in each variety of this game. Omaha poker is popular in three main variations:

Combinations of cards in Omaha Hi Poker are on the same principle as Hold’em, while the Omaha Hi / Lo poker rules provide for the division of the pot between the holder of the strongest and the weakest combination. Low combinations are usually made up of five cards from deuce to eight, with the weakest hand being A2345, where the strength of the ace is taken as 1. The probability of having a low combo in the game is usually determined by having at least three cards under the ninth on the table. In the absence of such an option, the winner of the hand and the owner of the entire bank will be the player who collected the strongest combo. Thus, winning combinations in the Omaha poker game will not always be determined by the strength of the cards, which should also be considered for beginners. In Omaha, as in Hold’em, there is no seniority of suits.

Variations of the Game

In addition to the above division of Omaha games, there are also limited and pot-limit Omaha poker.

The limited version of the game provides for the presence of restrictions on the bets, determined before the start of the game. In online poker rooms, the sizes of the allowed bets are recorded in the characteristics of such tables in the form of two numbers through the symbol (/), for example, 10/20, where the first number will mean the allowable volume of bets on the first two rounds of trade, and the second – in the later streets. In addition, variants of the game in Omaha poker with a limit on bets are characterized by the fact that for each level of bidding can be no more than four rate hikes. The size of the increase will depend on the table designation. The blinds in the limited versions of the game will be 1/2 of the numbers denoting the limit of the table.

Pot-Limit Version (PLO) is a variation of the game with bet limits, depending on the size of the existing bank. In this case, the bank is only those chips that are already in the center of the table. In pot-limit Omaha, in order to calculate the maximum bet size, the following rule is applied to the bank: the size of the last raise multiplied by 2 is added to the formed bank (that is, you call the bet, and then you can raise, taking into account the pot sizes received after the call).

Even though the Omaha poker rules do not differ much from the laws of Texas Hold’em, Omaha poker strategy and tactics may differ. So, at the initial stages of trading, namely preflop, players should make decisions based on the best combination of pocket cards. The best option, in this case, will be two suited pairs, for example, the King and Queen of Hearts and the King and Queen of Clubs. This hand provides the poker player an excellent chance of collecting a set, straight or flush. However, bear in mind that the set is a fairly common combination, which brings the player a victory very rarely. In addition, remember that because of the impossibility to use all 4 pocket cards in composing a combination, even an additional queen or king on the flop will not allow the player to collect a full house. A winning strategy for poker Omaha also provides for targeting the number of opponents at the table. Everything is simple here: the more opponents, the more carefully the player should approach the choice of starting hands. When playing this variety, one of the players at the table will have a straight or flush in almost every hand, and therefore you should join the battle for the pot after the flop only with combinations of two pairs and stronger.

Competent tactics of playing Omaha poker will require special care from the beginner because excessive aggression in such a variance can cost the player not only the current stack but the entire bankroll.

There are various types of Omaha poker:

In Omaha, the average number of players in a bank is significantly higher. The difference in the strength of the starting hands in Omaha is not so great, so it is almost impossible to be far behind preflop. That is why almost all the banks played in this game are multi pots.

If there are more players in the pot, then its average size is also larger. The larger the pot on the flop, the larger the bets on the subsequent streets, so Omaha is generally more expensive than Hold’em if you compare the same limits.

To win in Omaha, you need a much stronger hand. In Hold’em, they often win with two pairs or weaker combinations. In Omaha, these hands are considered almost trashy, and ready-made hands with redro are of paramount importance.

In Omaha poker, a lot depends on the strength of the hand, so the value of bluffing decreases quite significantly. If there are three cards of the same suit on the board, it is highly likely that someone has a flush.

Since draws are so significant, it is important to distinguish between statistically advantageous situations – when you have an advantage.

Oklahoma is a fairly new subspecies of Omaha that appeared only in 2010. In the same year, the first Oklahoma tournaments took place. The game aroused great interest not only among fans of Omaha poker but also Texas Hold’em, as it has a lot in common with both of these types of poker.

Oklahoma rules are very similar to Omaha rules. The main difference is that in the trading process, the player, approaching the river, remains with two cards instead of four.

The preflop game does not have any differences from Omaha, each player receives 4 cards and participates in the trade. After the flop opens, if the player wants to stay in the game, he or she must discard one of the four pocket cards during the game application. After this, the turn opens, and the situation repeats, along with his bet, the player discards one of the three remaining cards. Playing Oklahoma, the player starts with four cards, but when the river opens, he or she only has two cards left. Both pocket cards are required to participate in the preparation of the combination. Therefore, during a showdown, any three community cards on the board and two cards remaining in the player’s hand are taken into account.

Now you know the principles of this popular card game, and therefore you can safely embark on the first practical experiments. In general, you only need to practice more and carefully analyze your sessions, then you will be able to achieve a stable plus game in poker tournaments and develop your own unique strategy of Omaha poker.